I have been reading Trial By Battle, the first volume in Jonathan Sumption's history of the Hundred Years War. By which I mean that I have been reading it for months; it's a whopper. I shall not review it, partly because if you are interested in the period then reading it is a necessity regardless of what I think, and partly because it's so long since I read the opening chapters that I can't remember how or why it all started. 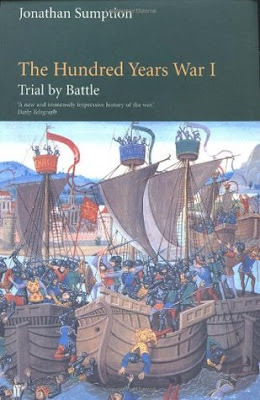 I shall therefore simply concur with the reviewers quoted on the back who basically say that he is as good on the detail as on the big picture and visa versa. I have previously noted his bizarre assertion that one used to be able to hunt monkeys in the forests of Brittany (before the last ice age possibly, but certainly not in the fourteenth century) but otherwise all seems in order. He appears to describe Isabella, Edward III's eldest daughter as his son at one point, but I suspect sloppy editing is the real culprit there. Or perhaps editing was also responsible for the first mistake and the king and his party were really hunting donkeys. Who knows?

I intend to read the next volume in due course, but will need to build up my stamina first. In the meantime I shall turn my non-fiction attentions to the Great War.
Posted by Epictetus at 16:16