We are intending to try Epic C&C Napoleonics this evening so the obvious thing to do was to confuse myself by having a first go at Memoir '44: Overlord. The confusion came in two parts. The games obviously belong to the same family, but in Memoir unit effectiveness depends on range and not strength while the opposite is true in Napoleonics. And while both Epic and Overlord are played on an area twice as wide as the original they use different approaches. Epic is one player a side with the playing area divided into three, whereas Overlord is teams (we had three a side) with the playing area divided into three and then each third into halves. So there was much confusion the other night - on my part, everyone else was fine - and no doubt there will be tonight.

As for Overlord itself, I'm not sure that I'll be in a rush to play it again. Last time we played a WWII game I complained that there was too much fiddly detail. So let me immediately lay myself open to a charge of inconsistency by saying that I don't find Memoir '44 detailed enough. On top of which, the role of a subsidiary commander seemed a bit dull to me. Because we had three people on a team the commander of the central section doubled up as overall C-in-C. I played one game in that role and while it was definitely more interesting I didn't feel that their was any enhanced enjoyment from having someone else carry out - or not - one's intentions. The mechanic of only passing over one card (or at most two) at a time means that there isn't scope for plans to go wildly wrong if you are the C-in-C or to act with any independence if you are not. The lack of Battle Back in close assault (another difference between the two games) also means that one can spend quite a bit of time not actually doing anything. I don't think there was ever much chance of playing the Napoleonic equivalent of Overlord, mainly because I don't have six (let alone eight) friends, but this hasn't prompted me to want to try.

One other thing I tried for the first time was swapping sides and refighting the game to see who won on aggregate. I'd always felt that this would be a good idea because none of the scenarios are particularly balanced. However there is a very cheesy flaw. First time round we were the Germans and won the scenario (I think it was Omaha Beach although I wasn't involved in setting the board up) 8-0; you can see what I mean about the scenarios being a bit one-sided. Therefore as US commander when we refought it all I had to do was ensure that we destroyed one German unit in order to win overall. And so that's what I did - accepted that we couldn't win the battle but went all out to take out a unit. In the end we lost that round 8-3, but won overall because we didn't make any attempt to actually get off the beach. I'm not sure I found that terribly satisfying. 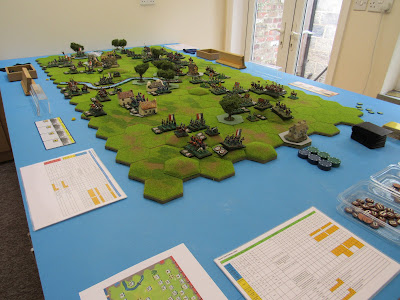