And so to the opera. Opera North have concluded their 2016-17 season with a semi-staged performance of Turandot. It also concluded a month of Puccini for me, during I had also seen performances of Madama Butterfly and Tosca. What all three had in common - aside from highlighting the composer's very odd attitude to women - was that the singing was better than the acting. I think we can cut some slack for Turandot given it was at heart a concert performance, albeit one with what appeared to be an unexplained giant chair looming over the stage. Still, the only previous time I'd seen the work before - in Gothenburg some years ago - it was fully staged, but for equally unexplained reasons featured Puccini himself sitting at his desk bang in the middle of the Chinese Emperor's court. At the point in the score at which he had died (the work was subsequently completed by Franco Alfano) he fell dead on the floor, causing some confusion in the audience because Piu had just done the same after stabbing herself to death.

Speaking of which, Cio Cio San was the issue with the Royal Opera House's live broadcast of Madama Butterfly. Not her singing - which was absolutely sublime - but simply she was too old. The whole point of the story is that a young woman is used and discarded by an older man. Whoever thought that casting a Cio Cio San who was clearly older than Pinkerton would make any sense, especially when portrayed in close up on a cinema screen wasn't thinking straight. In his pre-performance interview the conductor claimed that Ermonela Jaho could convey merely with her deportment and gestures the naivety of a fifteen year old; she couldn't. 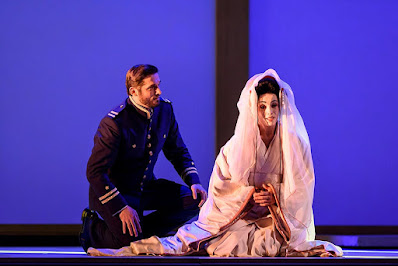 English Touring Opera's Tosca was most enjoyable. The set looked somewhat more Spanish than Italian and was of the usual simple nature for this company, but it did allow the heroine to exit in the intended manner, the first time I'd seen a production where this happened. I'm not sure that Tosca was lascivious enough or Scarpia evil enough, but it musically it all worked rather well. 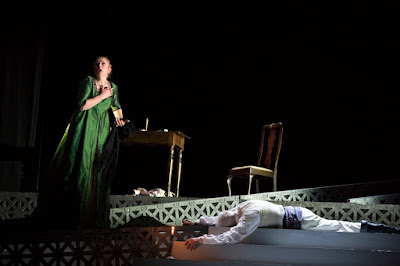