I have had the chance to set the table up for a game of Epic C&C Napoleonics: 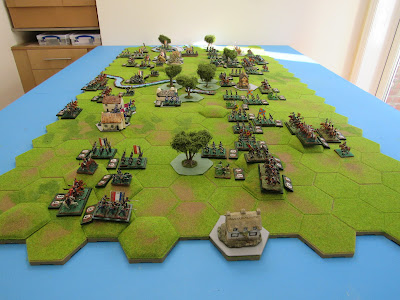 When I tried to work out my own version of C&C rules for an expanded playing area I went for something much larger, which possibly explains why I wasn't all that successful. As the picture shows the official version also leaves some space on my table for players to put their cards and dice trays in; which is nice. That white patch at the far end is the sun, which has put in a brief appearance in the UK. Don't worry, it will be gone before the long Easter weekend when everyone is off work.

And here's a shot of the strange blue in which I have painted my Polish troops: The game won't be played for a couple of weeks yet.
Posted by Epictetus at 21:45