We had a crack at Epic C&C Napoleonics last night in the form of the battle of Möckern and I would judge it a qualified success. Firstly, and I really don't mean this facetiously, we got it finished in just under three hours. Some games suit being spread out over two or even more evenings, C&C - notwithstanding labelling it as 'Epic' - doesn't. Translating the original boardgame to miniatures didn't quite work: the playing area looked lost in the middle of the table (at least once I had switched to Hexon; the larger offset squares looked OK) and the games were over in too short a period. My own attempt at expanding the scale didn't move along fast enough, but the official version seemed to hit the Goldilocks sweet spot of game length. 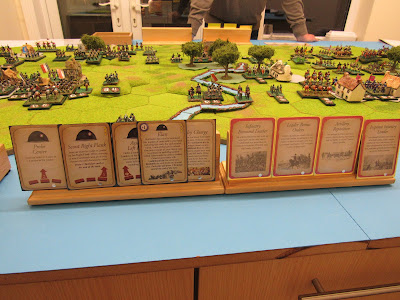 I was left in two minds about the Courier Rack, the cards visible to and usable by both sides. I got the feeling that sometimes cards were chosen specifically to deny them to the other player rather than because they were the most useful. I also felt that it made it harder to plan very far ahead compared to having all the options in one's own hand. On the other hand, and as Peter pointed out, if one's own hand is no good then being able to draw from the Rack at least allows one to do something. The requirement to play one's two cards per turn in different sections of the battlefield is a double edged sword. It means that things happen all across the table, but at the expense of being able to fully develop the action where one would wish to concentrate. Attacks are difficult enough to coordinate in C&C in the first place. The rules also allow one to move - but not battle with - extra units when certain cards are played. I felt that these additional moves were perhaps used too much as an afterthought by the players and should, at least in the early stages, have been more central to their thinking when choosing cards to play.

As for the game itself, it was a fairly easy French win. C&C scenarios are always unbalanced, but I'm not sure whether that was the only reason. The Allied attack never got going, partly because of the way the cards fell and partly because Epic is a different game to the base game and needs playing differently; on top of which James always seems to be lucky with the C&C dice in a way which he isn't necessarily when rolling ordinary dice. There was a bit of toing and froing over the two forwardmost of the French held town sections and James launched a cavalry charge for no better reason than he had two Cavalry Charge cards in his hand. (As an aside I believe that on the day the French cavalry commander refused point blank to do the same.)

So, in conclusion, it's worth another try of the rules as written, building on what was learned about how to play, before trying any amendments. What I also think I shall do is take a scenario written for a different ruleset, of which I have many, and translate it to C&C, which the intention of making it more balanced than those included with the rules.