"To rely upon conviction, devotion, and other excellent spiritual qualities; that is not to be taken seriously in politics." - Lenin

One of the minor, incidental pleasures of going to the theatre is watching the contrast as separate audiences for shows in different performance spaces converge and mingle; indeed I have written about it before here. It was with some amusement therefore that I watched the young man trying to sell copies of the Socialist Worker (a) to bemused parties of ladies arriving to see 'Thoroughly Modern Millie' at The Grand in Leeds whilst at the same time shouting (him, not them) "May must go, Corbyn must stay" (b). The reason for this was not some unexpected political message to be found in the musical (although like most love stories it is really about money and the power that goes with it - if you don't believe me then go and watch it again), but because Tariq Ali was speaking on Lenin in the Howard Assembly Rooms, which are attached to the Grand. It was naturally to the latter that I was headed. 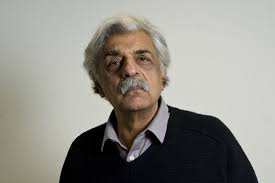 The rooms are owned and managed by Opera North and there was a Steinway on stage. I did wonder idly whether the Russian revolution was going to be explained by means of comic song in the style of Richard Stilgoe or, even better, Victoria Wood. However the truth was equally unexpected and just as pleasurable. A pianist appeared and played the first movement from Beethoven's Waldstein Sonata as a sort of warm up, an approach to public speaking of which I heartily approve. Ali was introduced as a public intellectual (no definition of this term was provided) and much of his talk seemed to me to be spent justifying the importance of the intelligentsia in early twentieth century Russia and, by extension, to the modern world as a whole, so perhaps there was an element of theatricality in all this; convincing the audience that we were in the elite because we had listened to a bit of classical music. It worked for me.


Ali's talk was interesting and very wide ranging; indeed it wandered off the advertised subject for long periods. There was a substantial section on Operation Barbarossa for example, with the confident claim made that had Tukhachevsky not been purged by Stalin in 1937 that the German invasion would have been defeated quite quickly. I have no idea on whether that hypothesis has any substance, but I do know that it has bugger all to do with Lenin. Nonetheless, as I say, it was all rather stimulating and thought provoking. 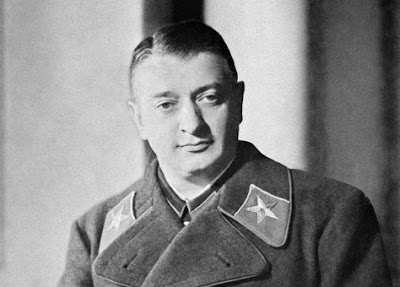 The question and answer session afterwards was, however, a whole different thing. There was a sizeable audience, perhaps a couple of hundred people, many of whom seemed still to be living in the 1970s. The chap who put out the water for the speaker and interlocutor was even wearing a beret in what appeared to be a Wolfie Smith homage. I can't believe that those who spoke from the floor had not seen the famous satire on British Trotskyism in the 'Life of Brian', but they certainly hadn't learned from it. As far as I could make out, in their opinion, all of the world's current problems were caused by Ali's joining the International Marxist Group in 1968, only to be made worse by him leaving the IMG some years later, or possibly it was the other way round. Only two things were clear: I was the only one there who had not come with an agenda to slag off the speaker, and that everything - and I mean everything - was his fault. It was all truly bizarre, although I must say that it was also somewhat nostalgic for anyone with first hand experience of how far left groups carried on back in the day . 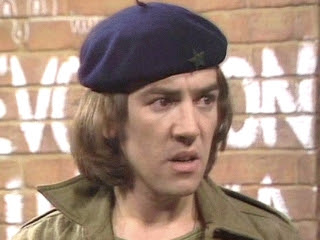 Wolfie was of course prone to shouting 'power to the the people' at inappropriate times. John Lennon's 1971 song of the same name was inspired by a meeting with Tariq Ali. Everything is connected.

(a) It has been a long, long time since a photograph of your bloggist last featured in the pages of the Socialist Worker. For those suffering withdrawal symptoms I can be found in the current spring edition of the One Traveller newsletter, New Horizons; less hair is involved on this occasion.

(b) With a bit more imagination he could have made that slogan rhyme.
Posted by Epictetus at 13:15