A classic study in homoerotic sadism

And so to the opera. From the title you will have deduced that it's Benjamin Brtitten, and you will be correct; Billy Budd to be precise. First let me say that musically it is superb. Opera North's male chorus get their chance to shine as the crew of H.M.S. Indomitable as their female counterparts did as nuns last week. The orchestra are, as ever, first rate and the cast, especially Roderick Williams in the lead role, sing gloriously. The stand out passage is that where Vere tells Budd of his fate; paradoxically, given that this is an opera, without any words being sung. The set is also striking, and actually conveys the atmosphere of a 74 gun ship of the line in the last decade of the eighteenth century. There are impressive bangs and flashes when the cannon are fired as the Indomitable seeks to close with the French ship it is chasing. 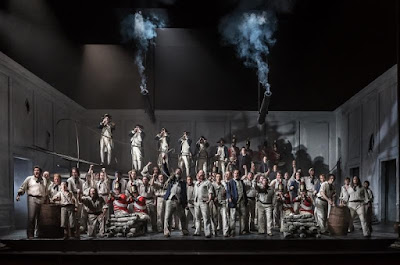 The problem is the story. Now, obviously if we are to start rejecting operas because of their plots then we won't have many (any?) left. But this is, I would suggest, both positively unpleasant and also ridiculous. For a view of the unpleasantness I can do no better than point you to an article written by James Fenton for the Guardian some years ago and from which the title quote comes. What is nonsensical is the significance that is attached to Budd's speech impediment. Now we've all known stammerers, we've all seen 'The King's Speech', we're all sympathetic to their plight. But I bet not one of us thinks that their frustration is a good excuse for killing someone, or that to do so is somehow consistent with being the epitome of goodness. This element was in the original novella by Melville; given how much else the writers changed they would have done well to junk that bit as well. (Another interesting take on the differences between book and opera can be found here.)

The libretto was, of course, co-written by E. M. Forster. The Nobel Prize for Literature is much in our minds at the moment, especially in the context of whether words set to music should count as literature. Forster was nominated for the Nobel thirteen times, but never won it. Interestingly the only other opera written based on the story of Billy Budd, by Ghedini and apparently never performed any more, had a libretto by Salvatore Quasimodo, the Italian Hermeticist poet who did, controversially, win the Nobel prize in 1959. When discussing Quasimodo, James Gardner wrote "There are two kinds of Nobel prize-winners in literature—those who honour that institution, and those who are honoured by it". I'm still not sure where Dylan fits in.