I should have read the reviews

"Life is so constructed, that the event does not, cannot, will not, match the expectation"
- Charlotte Brontë

The quote comes from Villette, Charlotte's last novel, written after the deaths of her sisters. The West Yorkshire Playhouse have staged a play based on the book as part of their Brontë season, which in turn marks the 200th anniversary of Charlotte's birth. (For those not familiar with the geography, Haworth is local enough to Leeds for this to be a big deal; attentive readers may remember that a walk to Top Withens was my favourite event of 2015.) I'd marked this as something that I wanted to see and throughout my illness I have fretted that I would miss it; in the event I caught one of its last performances.

Unfortunately, I had worried unnecessarily because it was crap. I was aware that it was a 'reimagining', but hadn't anticipated a science fiction version concerned mainly with the ethics of cloning. Whatever the novel is about - and to some that might be emotional growth or female emancipation or to others (perhaps those of us with a Marxian bent) it might be the search for economic independence - it isn't concerned with the humanity or otherwise of those conceived in vitro. But even if one allows that this is a stand alone play that only borrows the characters and the bare bones of plot outline it still fails on its own terms. It was boring, confused and uninvolving and I left during the interval; something that I haven't done for years.

Anyway, all that aside, it does give me  chance to trot out one of the best quotes from the book: "Happiness is not a potato".  It's really hard to argue with that. 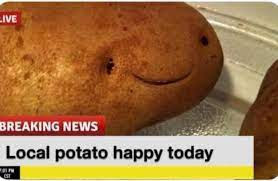