"Fashion wears out more apparel than the man" - William Shakespeare

And so it is with wargames rules; new ones displacing old more perhaps because they are new than because they are better. One set that has definitely been fashionable for a while is Black Powder, but I personally hadn't played any of the family of rules before this week. We actually used the period specific Pike & Shotte supplement that James had picked up at Derby, with his Italian wars figures as pictured here. 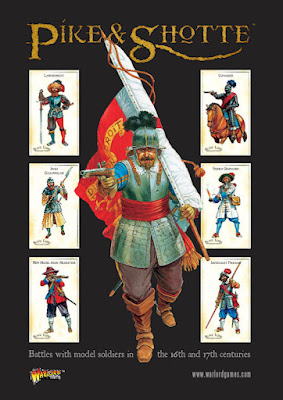 As a first game we obviously got things wrong, especially the best tactics to use, but I enjoyed the game and was left with a positive impression. They contain a number of elements familiar from other newish rulesets that we have tried such as To the Strongest! and Lion Rampant. We shall have another crack next week and hopefully will have a better grip on things thereafter. In the meantime:

Good points:
Bad points:
Sort-of-in-the-middle-there points:
I won the game, as the Imperialists. I had a plan based on the rules for breaking command groups, and which didn't work at all. In the end my victory came because of rather good luck both in a cavalry melee where I got charged both in the back and the front and still came off best and in the final clash of pike blocks. I prefer games which are unpredictable, but hope that the way this game turned on a few dice rolls isn't what always happens. I should also mention that I lost a Gendarme vs Stradiot melee by rolling five dice and getting five ones, a less than 7,500 to 1 chance; I'm prepared to write that one off as a fluke.