And so to the opera. I have mentioned before my love of verismo and so I painfully rose from my sickbed (aka the rather swish reclining chair in my living room) to go and see a double bill of one act Puccini operas: Il tabarro and Suor Angelica. 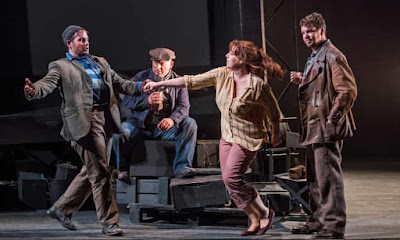 I'd seen the former about a decade or so ago when, and I acknowledge that this is of no interest to anyone else, I sat directly behind Germaine Greer in the audience. Verismo is perhaps easier to recognise than to define, but this is definitely the stuff. The plot should serve as a warning to anyone contemplating dabbling in anything extra-marital. Things really do not end well for the man sleeping with the married woman; although as some small compensation he gets some top tunes to sing while he's still with us. In fact life seems pretty miserable for everyone involved, but that's opera for you. 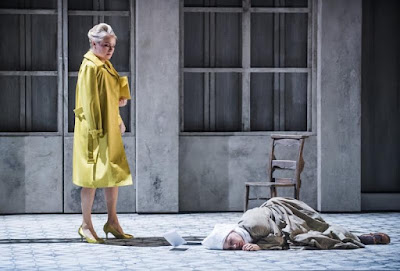 The latter work I had never seen, and it frankly wasn't any more cheerful. It isn't the bleakest opera about nuns; should you really want to be depressed then check out Poulenc's Dialogues des Carmélites. Forzano's libretto doesn't seem very sympathetic to the Roman Catholic church; the Christianity portrayed here is all about guilt and punishment; forgiveness of sins and redemption don't get much of a look in. However, musically it was excellent. The standout was Anne Sophie Duprels in the title role, a lovely voice and a more than passable backside. If that sounds unnecessary then you need to believe me that it wasn't anything like as gratuitous as the directorial decision to tell her to get her kit off in the first place. Many operas - Il tabarro for example - are rather erotically charged, and yet in all the dozens of Opera North productions that I've seen over the years everyone has always kept their clothes on. Quite why they decided that a piece set in a convent, with an all female cast and concerning a mother's grief at losing a child would benefit from nudity is not entirely clear. Rupert Christiansen, in his Telegraph review, describes that bit as 'rather naff' and he's not wrong.
Posted by Epictetus at 19:15