And so to the theatre. I have been to see Northern Broadsides' production of J. B. Priestley's "When We Are Married", and after two recent theatrical disappointments what a treat it was. For those who have never seen it, the piece is, first and foremost, very funny. Described by its author as "A Yorkshire Farcical Comedy" it is all that and more. It was written in 1938; indeed when it was first performed Priestley himself said it would provide a distraction from “the state of Europe for an hour or two” and that's one of the many aspects of the play that is as true today as it was then. However, as with "An Inspector Calls", it is set in the Edwardian world of Priestley's childhood. Whereas that play used tragedy to highlight the smugness of a bourgeoisie unaware of the catastrophe awaiting them, this one does it with comedy to equal effect. But more than that, it captures the strains and stresses that will inevitably develop between two people who spend twenty five years in each other's company; anyone who has ever been married will find it uncomfortably true to life. As I said above, many things have changed in the last century, but many others have stayed exactly the same. 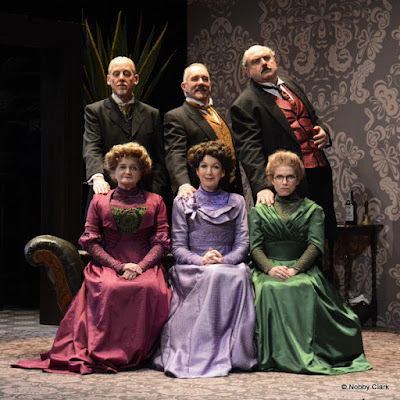 It was all to the usual high Broadsides standard and they even managed to squeeze some singing and dancing in. Rutter pinched the plum role of drunken press photographer Henry Ormonroyd for himself, which suited his ability (compulsion?) to ham it up. Special mention must go Steve Huison as Herbert Soppitt, a man with whom I have much empathy, and Kate Anthony as Clara Soppitt, a type of northern married woman whom your bloggist can confirm exists in real life.
Posted by Epictetus at 10:55