And so to the opera. I'd never seen Der Rosenkavalier before and being both too lazy to do any research and too mean to buy a programme I was surprised to gradually realise that it was a Mozart pastiche, even to the extent of being over long. Still if one is going to find inspiration anywhere then why not start at the very top?

It's not really about the Rosebearer or indeed, as the original title apparently had it, about the Baron for whom he bears the the rose. Instead its central character is surely the Marschallin, a woman sent by her family into marriage with a much older man who willingly sacrifices happiness so others may marry for love. As the Buddha said “In the end these things matter most: How well did you love? How fully did you live? How deeply did you let go?". 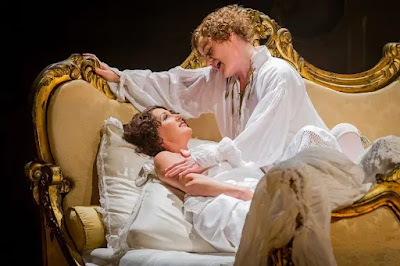 Musically the highlight is the trio at the end where the voices of the three sopranos - the male lead is played by a woman and in a Shakespearean twist spends a lot of time pretending to be a woman - combine to mark the turning point in all their lives. For the Marschallin, as she subsequently leaves the stage on the arm of the father of the bride, a recognition that time has passed. As for the wisdom of having an affair with someone the best part of twenty years one's junior in the first place, Strauss and his librettist Hofmannsthal pass no moral judgement; therefore neither will I.