I will speak with the King or I will die

"In war there is no prize for runner-up" - Seneca

Or is there? I have been to the Derby Worlds wargame show to help James with his display game and he followed up last year's 'Best Display Game' with winning joint 'Best Display Game' this year. The concept of two games receiving exactly the same number of votes in a secret ballot of the hundreds of punters attending the show seems somewhat unlikely, so I suspect a stitch up somewhere along the line. Quite who got shafted and why must remain a mystery, but I doubt it was us; the co-winners were monumentally pissed (1) all day so perhaps there was a moral dimension to whatever happened.

My usual role at these affairs is to carry things from the car to the table and then back again, but my illness made this impossible so I switched to ensuring that history was reversed and the Prussians lost the Battle of Lobositz. The scenario opens with a futile cavalry charge, but somehow the attack actually did rather well, dislodging two of the infantry units in the sunken road. Sadly I got carried away with it all, pressed the attack too much and then the wheels came off. Frederick did a runner - I still have no idea how he came to be Frederick the Great - and things slowly disintegrated. I must spare a mention for the Prussian Garde du Corps. Normally guard units on the tabletop perform appallingly, it's one of the most well known laws of wargaming, but on this occasion they swept all before them and at the end remained the only Prussian unit not to have suffered a fall in morale. 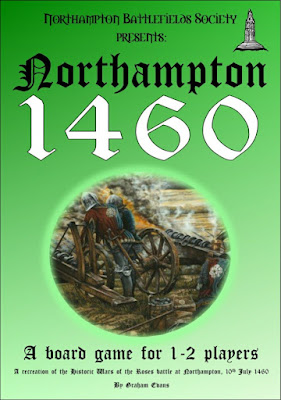 I also had a quick go at the participation game of the Battle of Northampton put on by the author of the Wargaming for Grown-Ups blog, and thoroughly enjoyed it. It was quick, based on what happened historically, but also allowing for the 'military possibilities' beloved of Messrs Featherstone and Roach. For the record I won a major victory as the Yorkists, capturing and executing all of the leaders on the Lancastrian side, but sadly failing to seize Henry VI.

There was a small amount of shopping. I bought some Hexon slopes. I really struggle with the three dimensional thinking required when laying it all out, but I believe (hope!) that I have bought the bits necessary to put out some straight edge raised ground. I also bought some trees from the, er, tree man and a couple of German machine guns - one being fired, one being transported - from Early War Miniatures. Hopefully this will give a bit of impetus to the still sadly languishing Great War project.

So, a thoroughly enjoyable weekend. It left me tired, but I'm glad that I went. It's a good venue - the breakfast is astonishing value - and the organisers are helpful and efficient. I look forward to returning.

(1) for the benefit of Americans and others who don't have English as their first language that is pissed as in inebriated.
Posted by Epictetus at 20:36