And so to the opera; to the early days of opera in fact. I have been to see Il ritorno d'Ulisse in patria. Monteverdi wrote this for the new Venetian opera house in the same period as L'incoronazione di Poppea reviewed here a couple of years ago. I saw Ulysses in a much smaller, more intimate venue and, perhaps because I was a good deal closer to the action, I enjoyed it much more. 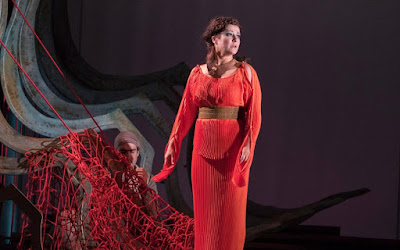 Penelope is of course the archetype of connubial fidelity, and as played by the voluptuous and dark-haired Carolyn Dobbin she looked the part of chaste and faithful wife; at least as your bloggist imagines it. The staging was abstract but effective - the same shapes doubled as the ribs of the ship that brings Ulysses back to Ithaca and as the bow that the suitors must string to win the queen's hand. As usual with English Touring Opera the parts are doubled and tripled up even to the extent that - for the first time that I can remember seeing - a female role is played by a man. I believe there is the usual debate about how much of the work is actually by Monteverdi - one must remember that this is a piece that wasn't performed for three centuries before scholarly reconstruction returned it to the repertoire - but like Poppea it ends it a beautiful duet between the two main characters: "O delle mie fatiche meta dolce e soave".


Readers will be pleased to hear that on this occasion I managed to maintain the conventions of polite society without inadvertently effecting bodily harm on any senior citizens. I also learned how to pronounce Telemachus; one is never too old to learn.
Posted by Epictetus at 13:53