On our way home

I went to the pub quiz for the first time in yonks last week. One question asked which spacecraft was piloted by Steve Zodiac; a straightforward enough question you might think, and yet it was met with blank looks all around the table. All together now: "My heart would be a fireball, a fireball..."


The series had many memorable characters such as Dr Venus (specially selected by the colonel to be part of his crew - and I think we know why Steve), Zoonie (did anyone else worry, even as a child, that keeping something that could talk as a pet was somehow wrong?) and many others. But surely the best had to be Robert the Robot, Earth's most advanced mechanical man. 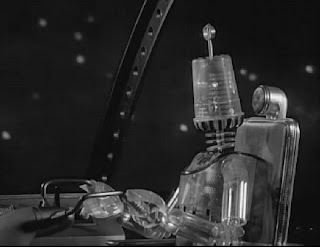 If Google, Apple and the others want us to accept driverless cars, all they need to do is put one of these behind the wheel; it doesn't have to do anything, but its presence will reassure the passengers.
Posted by Epictetus at 11:54