Of More Mice And About The Same Number Of Men

I have been taken to task by my elder daughter; a not terribly unusual event to be sure. On this occasion it is regarding mice, specifically those of Mousey Thompson. Having described how I had gone far out into the Dales and seen them for the first time, she pointed out to me that the church of St John the Divine in Menston also has them. Considering that church is about 100 metres from the family home (until 'we were pulled apart because her mom did not agree') she asks, with the know-it-all attitude so common in the young, whether it wouldn't have simply been easier to walk round the corner at some point in the last twenty years. Possibly. 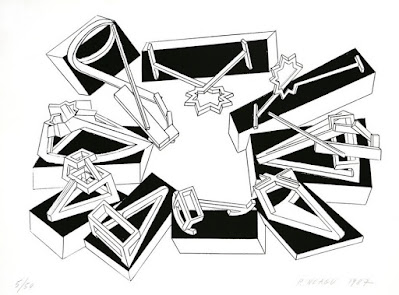 The latest exhibition at the Henry Moore Institute is by the late Paul Neague and I have been along to view it and mock. Like all shows at the HMI - and modern art in general - it left me baffled. Having said that, I found the the largest sculpture on display, Nine Catalytic Stations, to be rather peaceful. I have no idea whether that's what the artist was going for, but that's how it struck me.

I have also been to Leeds Civic Hall to see Agatha Christie's courtroom drama 'Witness for the Prosecution' performed in the round in the council chamber. The building was more fascinating than the play (it was obvious who'd done it from the off, the twists were unexpected because they were ludicrous and the actress playing Romaine was too young) and it was the first time that I had seen the ground floor. Opened by George V in the 1930s, it is very different to the 'epitome of Northern bombast' Leeds Town Hall which is eighty or so years older. Also interesting is the display of civic gifts received by Lord Mayors down the years. My eye was caught by that from the mayor of Ulan Bator, a rather fine statuette of a mongol warrior; I bet no one would have predicted the receipt and display of that object when the building was first conceived.