"A mind that is stretched by a new experience can never go back to its old dimensions." - Oliver Wendell Holmes Jr

Somewhat out of the blue there is going to be wargaming. Having mentioned my penchant for figure wargaming one Monday night at the Otley Boardgames Club, Chris - the convener of said club - expressed an interest in learning more about it all. Where better way to advise him to start than by reading my blog? Well lots of better ways as it happens, so I told him to read James' Olicanalad's Games blog instead. Naturally, he was knocked out by the figures, the terrain, the photographs - in fact the whole thing - and invited himself round to take a look at my wargaming annexe. Circumstances have meant that it has taken a little while to arrange, but a window has opened and tonight's the night. 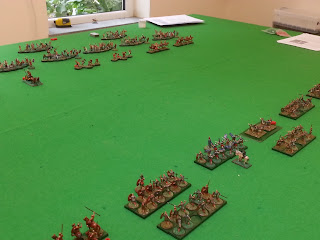 Obviously it's going to be somewhat of a comedown. Whilst my annexe is a reasonable enough location (having an entire building dedicated to one's hobby is kind of cool) the contents in it don't really compare with the legendary wargames room displayed in the blog that he actually read. However, and after careful reflection, I have decided that's his problem not mine. My own concern is what makes a suitable game for a newcomer to wargaming, with a strong background in boardgaming (Eurogames mainly), but, as far as I know, no particular interest in military history. 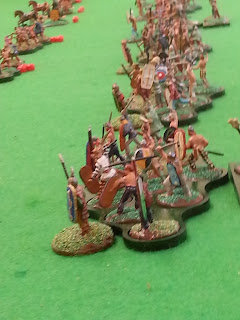 He has played Memoir '44, which is more than I have, so I'm not sure that C&C Napoleonics with figures would take him much further, even with the undeniable attraction of upside down paper plates as hills. However, I do think that a grid based game is the best place to start if we don't want to immediately put him off completely with turns that take forever while moves are measured. Similarly You go/I go games at least eliminate the chance of long stretches of inaction; for all its virtues there is an spooky inevitability in Piquet whereby the new player never gets any initiative. All that, and the fact that the appropriately marked cloth is still in place on the table, leads us to To the Strongest!, which proved a hit when played recently with more experienced wargamers. So the Romans and Ancient Britons have taken the field again without waiting for the reinforcements that have only got as far as being undercoated and I have been frantically trying to remind myself of the rules. So, is this the first step towards a lifetime of pushing lead and arguing the toss about flank attacks and arcs of fire? Or will he make his excuses and return to more peacefully themed games?